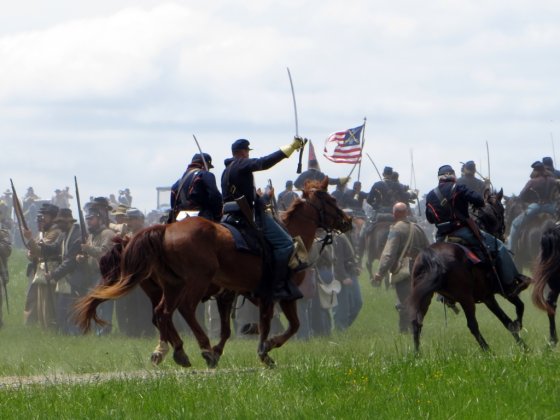 The United States Volunteer Cavalry Regiment is the largest Federal mounted and dismounted American Civil War Cavalry reenactment organization east of the Mississippi. The Regiment is comprised of numerous individual cavalry units representing and preserving the valor and deeds of the American Civil War Cavalryman. Our units are located in the northeast, southeast and midwest.
When all of our units join forces at large scale reenactments the Regiment is capable of fielding one hundred or more mounted troopers. No horse, no problem! The Regiment is also home to a large contingent of dismounted cavalry troopers that share equal standing with the mounted units.
The USV Cavalry Regiment participates in most of the major Civil War reenactments on the east coast and western theater events like Morgan's Raid in Ohio, Part of the Ohio Bi-Centennial. Many members of the regiment have also made appearances in important Civil War Films like Gettysburg & Gods & Generals.
If you would like to find out more about the United States Volunteers or have interest in joining a USV Cavalry Unit please contact any of the staff listed on this page.